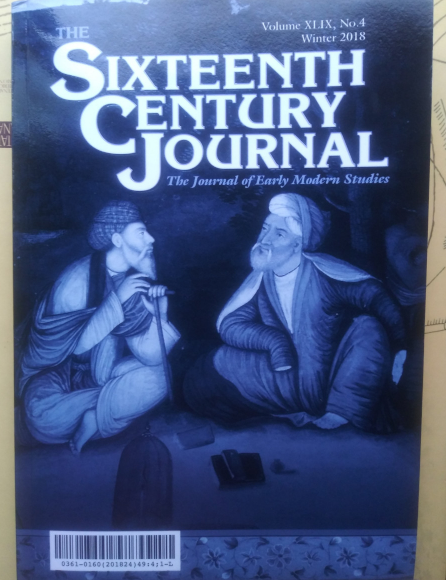 “For those who link the universe-shaking concepts of the Reformation with
the seismic intellectual system brought about by the Scientific Revolution, the remarkable life of the Spanish scholar, scientist, and reforming Christian Michael Servetus (Miguel Servet) is in many ways a personification of the forces coalescing to build the world in which we now live. Servetus was born between 1506 and 1511 in the uplands between Aragon and Navarre, separated by the great northern waterway the Ebro River. Receiving an advanced classical education and secondary schooling by his late teens, the remarkable young scholar quickly acquired very broad intellectual tastes. By the late 1520s, Servetus seemed to be assured of advancement into a court position in Charles V’s household. Despite his great advancements in medicine, science, and theology, the young scholar was drawn toward the teachings of the Reformation. Besides his important works on the circulation of human blood, he put out in rapid succession works attacking the Trinity. This destroyed any hope of a royal career, making him a fugitive from the Inquisition for the next two decades. He met his final fate, however, not at the hands of the Counter-­Reformation Church, but instead through the jealousy of the leader of Geneva, John Calvin, in 1553.

Although Servetus’s story has been told from many perspectives, this archival study of the Spanish scholar’s early life and training can hardly be excelled. Using genealogical and religious sources, scholars such as Gonzalez Echeverria and an entire generation of Iberian genealogists have tried to determine if Servetus came from a converso or an Old Christian family and whether he was born in Aragon or in Navarre. Servetus’s supposed Jewish origins are not easily proved but may have some connection to Nicolás de Villanuevs, who may have been a rabbi in the aljama of Tudela before his conversion. Servetus’s geographical origins seemed equally unclear until expanded by genealogical studies of the last decades that narrowed his birthplace to several towns in northern Aragon. These include the town of Villanueva de Sigena and the fairly well-off merchants Juan Serveto and his son, Anton Serveto. Servetus, also called Servet and nick- named Reves, hailed from a prosperous family of successful merchants who traded up into Navarre and across the Pyrenees into France. Though this group spread across northern Aragon and into Zaragoza, the family that brought the young scholar into the world lived in Villanueva de Sigena. Through this series of family units, supported by its leadership of prosperous and well-­traveled commercial leaders, it was graced with a small number of doctors and educators, of which Miguel Serveto is clearly the most important. For this type of research, the authors of this work have relied on the remarkable medieval and early modern archival resources of eastern Spain. The great depositories they utilize are headed by the great Archivo de la Corona de Aragón in Barcelona. Municipal, historical, and notarial archives in Barbastro, Calatayud, Tudela, and Zaragoza are perhaps even more significant for this investigation of Aragonese local history.

When Servetus’s intellectual gifts became apparent to his entire clan in his early tens, he began the first of his intellectual travels when he matriculated in the high school or Estudio General at Sariñena, south of Huesca. During these years, the itinerant scholar filled out his education with the study of trivium and quadrivium, a basic block of subjects that all those claiming to be educated had to master. Sariñena was run by a general master and a number of instructors, all of whom had at least a bachelor of arts. During this time, Servetus entered the service of Juan Quintana, an important scholar at the University of Paris who had served as the abbot of Montearagon and eventually became an important member of Charles V’s court. Servetus, by the early 1530s, had flirted with such high-­placed service, but eventually followed his intellectual connection with Erasmus to reject any real allegiance to the Roman Catholic Church, taking instead his own more independent religious path that led inexorably to his death.

Servetus entered the realm of higher education in the advancing University of Zaragoza in 1520. This institution, which had been in existence since the 1470s, was divided between the administrators; the chancellor, rector, and the instructional faculty; and the master, the bachelor, the steward, and the cubicle faculty. The educational courses that ran between three-­and-­a-­half and four years included astronomy, rhetoric, history, natural philosophy, and metaphysics. Instruction in these courses was carried out by the four main professors. The credentials and courses taught by these instructors might vary every year. Some of these men went to larger institutions such as Salamanca or Paris to improve their own education. By 1525, Servetus had won his bachelor of arts and taught briefly at Zaragoza. Within Spanish educational circles, he was described as a “twenty-­six-­year-­old man of the greatest talent who is a great philosopher.” Within a year, the new professor was finished at Zaragoza and traveled to Salamanca to continue his education. Moving across northern Europe in the next decades, Servetus advanced his reputation with the many works he published, a fact that increasingly endangered his life.

Though all the phases of Michael Servetus have been studied and restudied in the last century, this work is completely drawn from Aragonese archival collections, many of which were badly damaged during the Spanish Civil War. Through this thorough review of Servetus’s life from 1511 to1527, the scholar is provided with a massive amount of genealogical information about the several Aragonese towns Servetus lived before he moved to complete his education. The authors follow in great detail the careers and histories of the educational institutions in which Servetus chose to fill out his education before he moved toward his destiny in Europe. Many of the documents that have a bearing on Servetus’s family and his early educational career are gathered in a large appendix of over a hundred documents drawn from lay and clerical archives from Barcelona and across Aragon.”